skip to main | skip to sidebar

Summer is here and the middle of the week farmer's market is the perfect way to restock my fridge for a couple of days before the weekend grocery shopping trip. Our town's farmer's market is on Thursday afternoon. Though not very big, it has sufficient fresh produce to make me giddy with excitement. One of the vendors sells breads and cheese. The breads look fresh and taste divine. Last week I got a semolina loaf which I polished off with butter and farm fresh Apricot spread. This week I bought an olive bread loaf, to make sandwiches. Along with the bread I bought a couple of small cucumbers, a box of grape tomatoes and a big bunch of basil. I made Italian style sub sandwiches with pesto as the chutney.

The inspiration for the sandwiches is from this recipe. I had a lot of basil, so I made a big batch of pesto and froze it in small single serve dabbas, using this recipe I got from One Hot Stove.

This recipe is inspired from another blog, so I'm sending it to Blog Bites 5: Sandwiches and Wraps

My stove had the entire evening off, I made everything in the oven.

Toss the cherry tomatoes, the onions and the bell peppers in a bowl with olive oil, oregano and thyme. Spread them out and bake them for 30 mins at 350 F or until slightly brown. 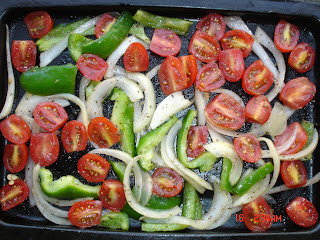 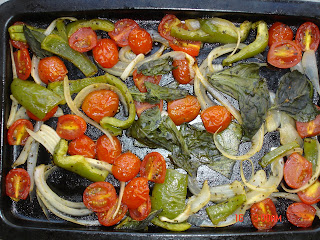 Next do the same for the potato and cucumber slices. The thinner the potato slices the better they will bake. 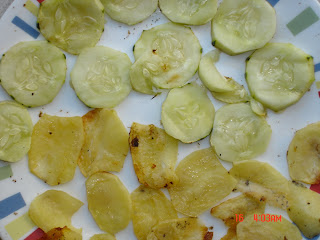 Halve the bread both horizontally and vertically. Add cheese to one side of each half as per taste. Bake it for about 5 mins till the cheese starts melting a little.
On the other half spread the pesto. Assemble the sandwich, adding veggies, salt and pepper. 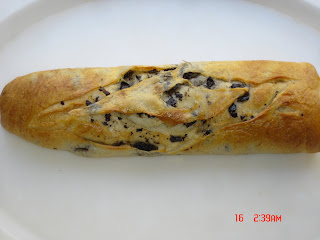 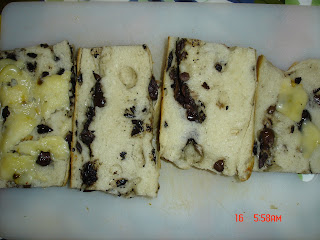 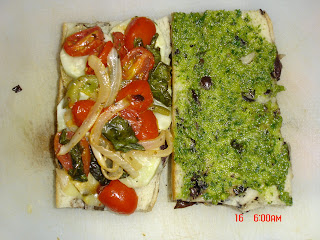 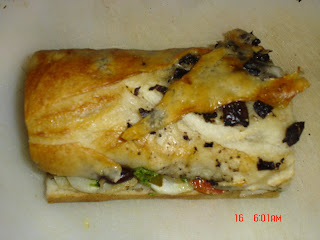 Though I'd love to steal the credit, the star of the dinner was the bread. It was soft, delicious, and had a ton of olives. Here's to a summer full of fresh produce from the farmer's market.

jk
Harrison, NJ, United States
I'm a dentist by profession, a homemaker by marriage, and an amateur cook by passion. I don't succeed every time I try to pursue my passion, but that doesn't stop me from trying all over again. I'm lucky to have a husband(read guinea pig) who supports me in my attempts, both successful and otherwise.